Obsidian Vineyard recently recieved a Gold Medal and Trophy for their Weeping Sands Syrah 2010.  This divine wine was the star player in July 2011 at the Spiegelau International Wine Competition. At this competition syrah wines from New Zealand and shiraz wines from Australia were represented.

On NZ National Radio’s “Afternoons” with Jim  Mora, the director and co-founder of the Spiegelau International Wine Competition, Belinda Jackson, had this to say about the trophy winning Weeping Sands syrah 2010: “It’s an absolute baby, but it is totally delicious. It is rich and full bodied. It’s powerful but it’s also very elegant. It’s got this amazing velvety texture, and it’s packed with this dark spicy plum fruit and a fair bit of tannin. Fantastic to enjoy now, or put a few bottles away for time to come.”’

Winemaker Michael Wook was already a syrah fan when he returned from Australia in 2002 to work on Waiheke Island: “I loved Australian shiraz for its full colour, intense flavour and aromatics. My interest was developed further when I became involved with the Waiheke syrah wines of Passage Rock, and I leaped at the opportunity to develop my own styles at Obsidian vineyard from 2006” said Michael. “The 2010 season was nearly perfect for most growers on the island. We feature the blending of a small amount (2.5%) of viognier, a white grape, during fermentation. This small dash adds aromatics to the wine and intriguingly deepens and sets the colour”.

The new release “The Mayor” 2011 a visionary red blend now available from the Obsidian cellar door in Onetangi. The wine derives its name from Mayor Island, the reknowned source of Obsidian volcanic glass in New Zealand. So what’s ‘visionary’ about it?……. It does not contain either Cabernet Sauvignon or Merlot (the traditional ingredients of many classic red… 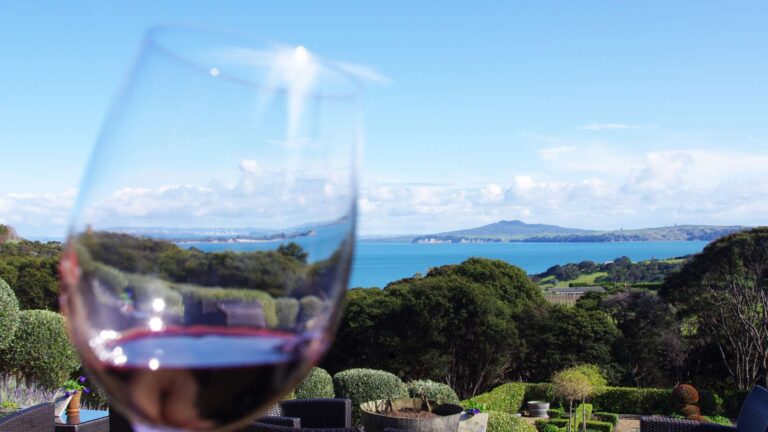 Things couldn’t be better for Waiheke Island Wine Tours who have just been awarded a 2013 Certificate of Excellence by TripAdvisor. Owners Wayne Eagleton and Jean Goodbrand were advised “This prestigious award placing you in the top-performing 10% of all businesses worldwide on TripAdvisor, is given to businesses that consistently earn high ratings from TripAdvisor…

We were very excited to be accepted into the TripAdvisor Hall of Fame in 2018. This honour is awarded to companies that achieve TripAdvisor Certificates of Excellence for five years running. We are so happy to see that our hard work and the work of our fabulous guides is being recognised in this way. This…

Frank Hall, a recent client of ours was on a cruise which stopped in Auckland. He came out on tour with us here at Waiheke Island Wine Tours and later was then asked by Jane Fraser of the Sydney Morning Herald, to write a story about his most favourite excursion. Wonderfully, he chose us and… Business is so brisk that the owners of the only Qualmark-accredited wine tour business on Waiheke Island have invested in a second vehicle.  “We started keeping track of how much business we were turning away” said owner Wayne Eagleton “and decided that it was the time to take the next step”. The vehicle, also a…

We use cookies on our website to give you the most relevant experience by remembering your preferences and repeat visits. By clicking “Accept All”, you consent to the use of ALL the cookies. However, you may visit "Cookie Settings" to provide a controlled consent.
Cookie SettingsAccept All
Manage consent

This website uses cookies to improve your experience while you navigate through the website. Out of these, the cookies that are categorized as necessary are stored on your browser as they are essential for the working of basic functionalities of the website. We also use third-party cookies that help us analyze and understand how you use this website. These cookies will be stored in your browser only with your consent. You also have the option to opt-out of these cookies. But opting out of some of these cookies may affect your browsing experience.
Necessary Always Enabled
Necessary cookies are absolutely essential for the website to function properly. These cookies ensure basic functionalities and security features of the website, anonymously.
Functional
Functional cookies help to perform certain functionalities like sharing the content of the website on social media platforms, collect feedbacks, and other third-party features.
Performance
Performance cookies are used to understand and analyze the key performance indexes of the website which helps in delivering a better user experience for the visitors.
Analytics
Analytical cookies are used to understand how visitors interact with the website. These cookies help provide information on metrics the number of visitors, bounce rate, traffic source, etc.
Advertisement
Advertisement cookies are used to provide visitors with relevant ads and marketing campaigns. These cookies track visitors across websites and collect information to provide customized ads.
Others
Other uncategorized cookies are those that are being analyzed and have not been classified into a category as yet.
SAVE & ACCEPT